subtropical garden in the Nether-Polar area

focus on families and entertainment

It all started with the concept of the Family Entertainment Center based in Kogalym, Russia for Lukoil, one of the Largest Oil Producers in Russia. The concept was created by Aquamarine and approved by the Principal Mr Vagit Alekperov in January 2013 with Construction completion in September 2016.

Galactica Entertainment and Sports Complex in Kogalym is an Entertainment facility that encompasses all modern entertainment, retail facilities and family requirements in one location, for the people of Kogalym and the surrounding areas of the Khanty-Mansi Autonomous Okrug.

Kogalym in the Khanty-Mansi Autonomous Okrug, Russia; is a township and community created by the Lukoil Oil Industry. Kogalym would not exist without the oil fields of the Northern Siberian Plateau and until now the 55,000 inhabitants have had no types of Entertainment and quality retail providers. .

The development provides a canvas for connecting the local work force of the community in Kogalym. We imagine a broad, changing spectrum of activities, from the most casual and personal moments, to group events, family moments and formal group celebrations. The success of the development will be measured by the new experiences and recurring rituals that people create there.

Aquamarine Projects was awarded a Design Supervision contract to control and audit the work of the Main Contractor and all Sub-contractors. This was enabled so that the initial vision of the Principle could be completed according to the design completed by Nicholas Traviss.

Aquamarine Projects are also advising the Clients regarding the Operations and Marketing objectives for the complex. We are playing an integral part in the start-up and on-going management of the complex.

On the 13th of June 2012, Nicholas Traviss was contacted by Marina Kulishova a personal representative of Mr Vagit Alekperov of the Russian Oil company, Lukoil. After the initial information gathering by Ms Kulishova a meeting was held at the Lukoil offices on the 11th of September 2012; and the concept and project were discussed in more detail.

Auqamarine was appointed to come up with a preliminary concept presentation for Mr and Mrs Alekperov to approve.

The Basic idea from Mr Alekperov was to create a Complex with an oceanarium, aqua park, winter garden and coffee shops.

After six weeks of concept and presentation development a draft was ready to present to Mr Alekperov and Lukoil Western Siberia, this presentation was made on the 24th November 2012.

The Final presentation was approved and the Detailed Developed Design Contract had commenced by the 2 nd February 2013.

SFMM was appointed in October 2013 to commence the Expertisa and Proekt Working Documentation. Proekt Certification was awarded in January 2014 and a Tender for the Construction was commenced.

Due to difficulties with international Sanctions against Russia, Aquamarine could not carry out the Specialist Construction for the Aquarium, Aqua-park and Botanical Garden.

The Construction company Erel Gazstroy was awarded the Main Construction Contract and work was commenced on the 1 st August 2014. 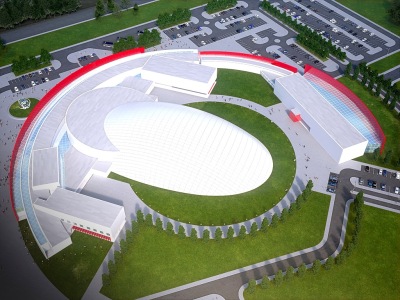 It is envisioned that the development will provide an innovative and inspiring destination, which will have, in one place, entertainment, recreational and retail facilities for the people of Kogalym and the surrounding areas of the Khanty-Mansi Autonomous Okrug and be fully open by Summer 2016.

Individual elements within the development will have a synergistic connection based on the sympathetic and well-considered placement of these elements. Emphasis will be given throughout the development to introducing educational and learning opportunities, ensuring that the Complex will become a community-oriented destination.

The development should provide a canvas for connecting members of the local community. We imagine a broad, changing spectrum of activities, from the most casual and personal moments, to group events, family moments and formal group celebrations. The success of the development will be measured by the new experiences and recurring rituals that people create there.

The development was guided by principles of environmental awareness, and will utilise energy efficient building systems, and appropriate selection of materials and form to maximize long-term performance.

The development shall be viewed as a ‘landmark’ for this region using architecture and technology that meet this standard. Aquamarine staff have travelled 1,600,000 Kilometres back and forth from Auckland to Siberia, that's two trips to the moon and back or forty times around the Earth.

A great team of people was contracted to create this development; The Main Contractor from Kazan Erel Gazstroy which was a mainly Turkish Project Management and Engineering team, they provided a thousand Turkmenistan workers on the project. We also contracted a Turkish Technical design team SFMM, that obtained Expertisa and Preokt for the work to begin.

Lukoil Head Office, Lukoil Western Siberia and Fund our Future were acting as the client. And SKK which was a Special Purpose Company setup to construct and operate the project.

Aquamarine holds a Management contract to support the Operations and Management team.